Gameing Zones
The Game Mat helps you organize your cards during a Duel. When you use your cards you place them on the Game Mat. Different kinds of cards are placed in different Zones. Each Duelist needs their own Game Mat; place them together while Dueling. This combined space is known as “the field.” The Game Mat contained in this product is just for your half of the field. The cards you “control” are the cards on your side of the field. You can also Duel without using the Game Mat as long as you remember where to place the cards. This is where you put your monsters when they’re played. 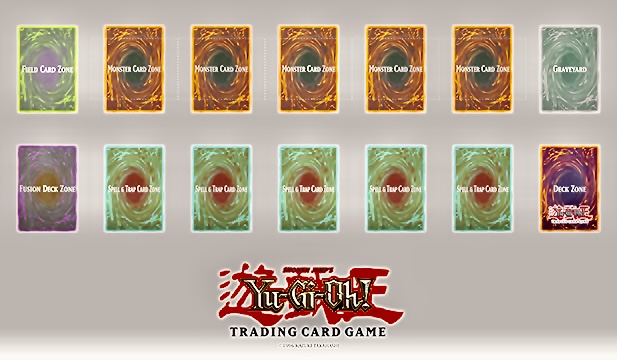 Spell & Trap Cards
This is where you put Spell & Trap Cards. You can have up to 5 cards here. You place them here face-up to activate them, or place them face-down. Pendulum Monster Cards can be activated in the leftmost and rightmost zones as Spells. This causes the zone you use to also become a Pendulum Zone for as long as the Pendulum Monster Card is there. When Monster Cards are destroyed, and when Spell & Trap Cards are used, they’re sent face-up to this space. The contents of both players’ Graveyards are public knowledge, and your opponent can look through yours at any time during the Duel. The order of the cards in the Graveyard should not be changed. Graveyard is shortened in the card text to “GY”.

Fusion/Misc. Zone
This is the side to where all the "special" cards besides fusion, and other monster types - mostly the black and white cards as well.

Deckpile Zone
Your Deck is placed face-down in this space. You draw cards from here to add to your hand. If a card effect requires you to reveal cards from your Deck, or look through it, shuffle it and put it back in this space afterwards. Special Spell Cards called Field Spell Cards are played here. Each player can have 1 Field Spell Card on their own side of the field. To use another Field Spell, send your previous one to the Graveyard. Field Spell Cards do not count towards the 5-card limit of your Spell & Trap Zone. Place your Extra Deck face-down in this space. You can look at the cards in your own Extra Deck during the game. During a Duel, Extra Deck Monsters may be Summoned to the field from here using special methods. Pendulum Monster Cards that would be sent from the field to the Graveyard are placed face-up here.

Field Zone
This is where you put your monsters that are Summoned to the field by special methods from the Extra Deck, like Link Monsters and Fusion Monsters. Normally, each player can only use 1 of these zones. A monster placed in this zone does not count towards the 5-monster limit of your Main Monster Zone.