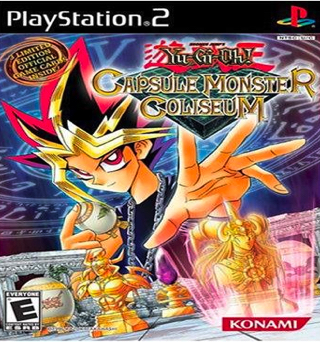 In Campaign Mode, the player assumes the role of Yami Yugi as he competes in a Capsule Monsters tournament. However, both Yami and Yugi have no idea on how to play the game at the time, having been too eager to enter before learning the rules of the game. They meet Grandpa at his new Capsule Monster shop, where he shows them how to make an element Symbol that represents them in the game and allows them to purchase as many monsters as they can with the MP they earned making it. He also explains the eight monsters types: Light > Dark > Earth > Thunder; Fire > Wood > Wind > Water. In other words, having monsters of a single type is VERY dangerous, making enemy victory easier. The Symbol also affects the monsters they control; for example, Dark monsters would be weakened by a Light Symbol. And if the Symbol is destroyed, they lose. The main way to win is destroy all your opponents monsters, leaving them with no moves. (Although one could also destroy the Symbol, but have less victory spoils, AKA destroyed monster, to choose from)

Afterwards, Yami Yugi enters the first arena and defeats Joey easily. (He choose four Fire Reapers for his monsters and choose a land map disadvantageous to them). Before heading off for his next opponent, Yami Yugi is told by Joey that if he clears all four arenas, a "new path will appear or somethin' like that".

Yami Yugi leaves and moves on to defeat Tristan, Tea, Duke Devlin, and Grandpa, clearing the first arena. Duke and Grandpa prove to be skilled by choosing their land map and monsters to cover weaknesses while Tristan and Tea prove easier to beat due to inexperience. Tristan's stage introduces areas on a land map that can damage certain monster types that are not suitable for it. Tea's stage introduces occasional changes the map that occur the longer the match is drawn out; hers is a harmless snowfall and loss of Light power-up.

In the second arena, Yami Yugi defeats Weevil Underwood, Rex Raptor, Mai Valentine, Mako Tsunami, and Mokuba Kaiba. Rex and Mokuba also have fields that can damage monsters; however, Mokuba's is type-specific. Mai proves the hardest to beat due to her strategic choice of monster types. Though Mokuba is confident in his skills (see Volume 3 of the manga), Yugi beats him and learns that his arch-rival Seto Kaiba is in the tournament as well.

Now having earned his way into the third arena, Yami Yugi faces Odion, Marik Ishtar, Bakura, Bandit Keith and Maximillion Pegasus. No real skill is needed for Bakura, since he's a novice like Joey, Tea and Tristan; Pegasus, Odion, Marik and Keith prove the strongest of the players here. Odion plays a simple strategy, so outwitting him is easy. Bakura and Keith's fields are neutral, having no special transformations. Pegasus and Marik have fields with different type advantages; however, only Marik's field literally changes based on where the monsters are moved (the field is composed of cubes that represent each element).

With only one arena left to go, Yami Yugi proceeds on.

In arena four, Yami Yugi is shocked to find the possessed versions of Marik and Bakura as opponents; each saw the match their other self had with Yami Yugi, so it's best to use new strategies. Other shocking news is Shadi has taken part in the tournament along with Ishizu Ishtar. Finally, Yami Yugi comes face to face with Seto Kaiba and defeats him; interestingly, Kaiba only plays a single Blue Eyes. Shadi's strategy focuses on confusion and keeping his pieces from being bunched together. Kaiba and Ishizu cautiously send out monsters, keeping a guard around their symbols. Against the Yami (dark) counterparts, it's a (literally) pretty straight forward match, but their fields each have a nasty surprise.

As soon as this area has been cleared, lightning will strike in the sky and the clouds will become dark purple; the inspiring music also changes to more ominous theme. Two orbs of light will twirl out of the sky and enter the ground, causing a towering fortress to emerge with a large gem shining on top of it. Both the Pharaoh and Yugi realize this is the new path Joey had spoken about before, meaning that the strongest opponents of the Capsule Monster Tournament wait within it.

Upon the defeat of Kaiba, the player has successfully claimed the title of King of Capsule Monsters.

The game has some deviations from its manga counterpart. Both players have a piece called a "Symbol" (which Mattel later called a King Monster) and a number of monsters depending on piece limit and amount of monster points to spend. The object of the game is to use your monsters to either destroy all your opponent's monsters, or their symbol. After games, monsters can level up making them stronger in the next game. Monsters can fuse in the game, but you do not get the material monsters back afterward; only the fusion. Some terrain on the field can make a monster stronger or weaker depending on the monster's attribute. The total amount of monsters there are is 200.