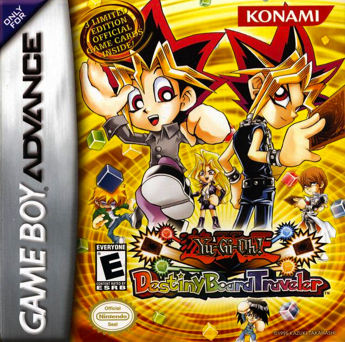 Yu-Gi-Oh! Destiny Board Traveler, known as Yu-Gi-Oh! Sugoroku no Sugoroku in Japanese, is a game created by Konami for the Game Boy Advance, based on the Yu-Gi-Oh! manga. In this game, players can compete against computer-controlled opponents or their friends for control of the Destiny Board.

The game combines the Yu-Gi-Oh! Trading Card Game and a 5x5 game board. Each game board has a different theme, determined to by the character it belongs to.

According to the instruction booklet for the game, Solomon Muto created Destiny Board and this is evident from him commentating throughout each game and being able to use his Super Power to alter the rules for the game.

On the Title Screen, players choose whether the game will be single player (1 Player) or multiplayer using 1-3 Game Boy Advance Game Link cables (2 Players - 4 Players) and can access the Options screen to change various game setting. The number of players is selected by pressing the SELECT button on the Game Boy Advance system, and a game pack was required per person to play. In games where there is only 2 or 3 players, the computer will contol the other characters.

Pressing the START button allows the players to select characters and set-up the Destiny Board. In multiplayer games, each player choose his/her own character from those available, but Player 1 chooses the set-up of the Destiny Board from those available, as well as the win conditions. AI-controlled characters are chosen randomly. A full game can take anywhere from 15 minutes to six hours, depending on how many victory stars you set as the win conditions.

After setting up the game and confirming the win conditions, the action starts. The order of the players' turns are determined randomly at the start of the game and throughout the game Grandpa Trusdale gives a running commentary on each player's actions. Gameplay involves playing randomly given cards.

Each player is given an initial hand of monster cards (no magic or trap cards are used in this game) and from this hand players choose the cards they will set on the special Summon Die that is thrown at the end of each players turn. The card distributing system prevents players from receiving the same hand twice and will usually equalize the chances of them getting both good and bad cards. Fusion, Ritual and Effect Monsters are treated as Normal Monsters in this game. There’s a Graveyard, but you can’t see which monsters reside there or bring them back to the board.

At the start of each player's turn one card is drawn that respective player's Deck (There is no limit to the number of cards in each player's Deck) and a mini menu appears at the bottom of the screen. This menu enables players to set up to six of their available monsters on the Summon Die or view the destiny board from various perspectives. When a player rolls the Summon Die their character either moves or stays on their current square depending on the roll result.

To win a game, a player must get a certain amount of victory stars as set in the win conditions. The level of a monster you summon determines how many stars you get (eg. if you summon a Silver Fang, you’ll get 3). Whenever a player’s monster is destroyed or Tribute Summoned, he/she will lose the stars for that monster.

Twelve characters from the Yu-Gi-Oh! series appear in Destiny Board; however, only eight are initially available. The other four must be unlocked by entering specific passwords on the title screen.

Note1: The characters use Cookie Cutter Decks, most of which are loosely based on ones they used in the anime.

Note2: Pressing B in the main menu in the double pack version takes you back to the game select screen, so you can’t unlock the secret characters in that version unless you use a cheat device.

There are Super Powers players can occasionally use during a game to tip the odds in their favor for one turn. Super Powers do not have to be activated on the turn they are awarded but for most of the characters it is more beneficial to do so. Some of the characters abilities mimic and are renamed after Spell or Trap Cards from Yu-Gi-Oh! TCG.