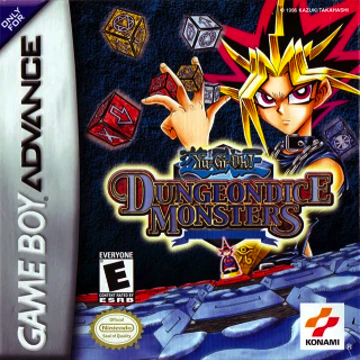 In Dungeon Dice Monsters, each die has six sides, and on a side will be one of six different crests. Players take their choice of three dice from their selection of 15 (their organized "deck" so to speak), and take a roll during their turn. To summon the specific monster of that die, players have to end up with two or three monster crests of the same number; so, if the monster is a level two, players will have to roll two or three "Level Two" crests on their turn. Any other crest will build up specific ability points: movement, attack, defend, magic, and traps, and without points in any of these categories, players can't do that specific action. So, in other words, if players don't have any movement points, they cannot move their monsters along the board. Same with attacking and defending or casting magic or traps; without points, these actions cannot be performed during a player's turn.

If a player rolls the crests necessary to summon the monster on a specific die, they can then put him on the playing field. This is where strategy really comes into play: players "unfold" that monster dice into a six square shape and place it on the board, connecting a "path" from your Die Master character, and attempting to make that path to the other player's Die Master...but since he's doing the same thing during his turn, it's a chess game of sorts trying to create the best path without making it easy for the opponent to get one of his monster to your Die Master icon. The first player to lose his Die Master to three attacks with an opponent's collection of monsters loses the match.

As complex as this game sounds, it really isn't, and Konami created a good interface to make selecting three dice as helpful as possible. Players can tell the interface that it wants three dice that will be the best for specific crests; so if a player's looking for the best three dice that will offer the best chance for, say, movement points, the game can auto-select these dice for the player. Same with summoning monsters; if the player selects two Level Three monster dice out of his hand, the game will seek out the best die out of the rest of the hand to give that player better odds at summoning that level beast. And, the game weighs heavily on luck as well as strategy; after all, players roll dice, and its completely up to what appears on the dice.

And because this is a "collection" game, players can take their strategically laid-out hand and go up against other owners of Dungeondice Monsters through the use of the GBA's link cable. Players can even trade dice as they earn them in each of the matches and tournaments.

But as fun as it is, Dungeondice Monsters falls into that same problem that Eternal Duelist Soul: there's nothing beyond simply challenging other players in individual games. The options allow for single matches or tournaments, but there's no storyline to follow or any real "exploration" in the Yu-Gi-Oh! world. Perhaps Konami will introduce a more involving gameplay mode in a sequel, much like what the company's doing with the card battle series in the upcoming Yu-Gi-Oh! Worldwide Edition: Stairway to the Destined Duel.

This Yu-Gi-Oh! thing is really surprising the hell out of me. As much as the cartoon is a real turn off for me, the games that are based upon the series are really well designed...at least the actual mechanics of the design. Dungeondice Monsters needs a few necessary elements, namely a detailed tutorial mode as well as an involving story option to really shine in the GBA's library, but even with these elements out of the mix the game package is extremely enjoyable, and not a formulaic or routine game design. You haven't played anything quite like this one on the GBA.