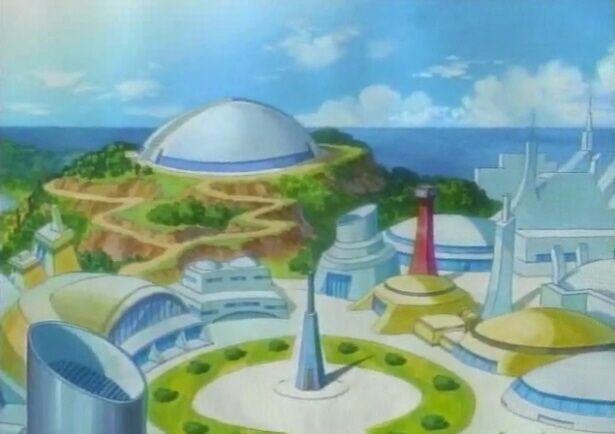 Kaiba Land is the name given to theme parks set-up by Seto and Mokuba Kaiba.The first Kaiba Land is an indoor amusement park. It had has various features, including 3-D simulation rides, all of which use cutting edge technology.

The hidden attraction in the park is the theme park of death, Death-T. This cost ¥10 billion to construct and was made for Kaiba to get revenge on Yugi.

Death-T 1 contains a shootout game, "Shooting Stardust".
Death-T 2 is comprised of three stages:
"Electric Chair Ride" ("Electric Chair Ride of Death" in the Japanese version): A ride designed to scare the passengers and electrocute them with a million volts if they scream. "Murderer's Mansion": a haunted house, with a large guillotine. Entrants must solve a riddle to avoid having their hand cut off.
A battle with the murderer Chopman in a chamber in the mansion.
Death-T 3 contains a room with falling blocks. The player must climb the blocks to the exit without getting crushed.
Death-T 4 contains a giant Capsule Monster Chess arena. An artificial Penalty Game is inflicted on the loser.
Death-T 5 consists of a game of Duel Monsters in the dome at the top. An artificial Penalty Game is inflicted on the loser.
A KC Stadium was later built outside the skyscraper, which served as the venue for Yugi and Kaiba's Duels with Aigami. The blue eyes monorail as seen in the virtual world arc. It had the following features: